The second week of the Crissy race series was held this Thursday and it’s safe to say the season is fully underway! Conditions were a bit gusty, shifty and holey on the inside but with solid 20’s outside through the center of the bay. Daniela Moroz (3,2,2) has showed she is in it to win it this season. In the two races thus far she has been on Johnny Heineken’s (1,1,1) heels and consistently ahead of the rest of the pack.

Most of the fleet left the beach on 9M kites for the first race with the wind peaking right before the start of the night. Stefaans Viljoen (2,3,4) showed that courage pays, starting as the only port tacker, he crossed the entire fleet and didn’t look back. By the time the rest of us tacked back he was gone, rounding the windward mark 20 seconds ahead.

By race two the lulls had grown and many in the fleet switched up to 11m kites. Following Stefaan’s lead there were a number of port tackers. These port tackers were mixed Daniela, Johnny and Stefaans crossed the fleet while the rest of the foilers were forced to duck or tack. Even ducking seemed to be beneficial with the fluky wind on the inside. Likewise downwind most of the fleet opted to stay farther outside to avoid the vapor holes around Anita.

Race three looked much like race two with more port takers successfully making it across the fleet. Downwind most of the fleet was able to carry it a little further inside before heading out. This compressed the fleet a bit and the pack had some good match races on the final leg. 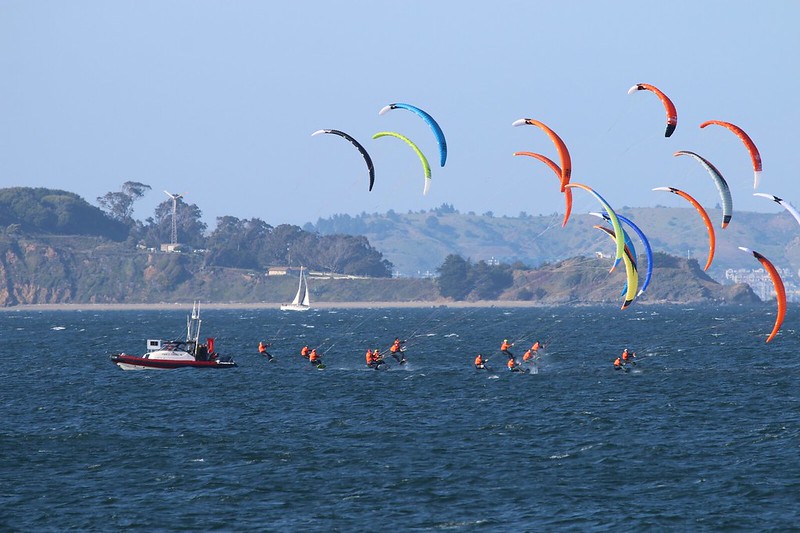